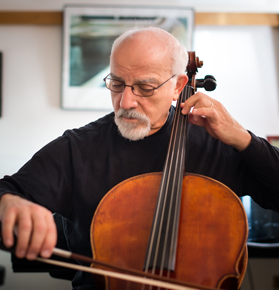 Convert to your time zone.

In order to gain the ability to meet all the demands of a composition, musicians must have a vast repertoire of movements that give them the freedom to use their bodies with maximum efficiency.

In our time together, we will focus on the cues and information provided by our body rather than by our intellect or auditory sense. We will explore options in movement as a means of enhancing freedom and avoiding reliance on one, habitual way of moving.

Most humans accept the ways that they move as if they are a part of their genetic makeup. In reality, they learned to move by trial and error, and their nervous system is wired according to their experiences. Unless they are challenged to question this wiring and to explore new possibilities of movement, they limit their range of expression. It is useful to be challenged to explore new ways of moving while playing, and to correlate them with minute differences in the quality of sound.

Through my experience, I have found that when we discover the power of becoming aware of small differences in our movement, it is not only our sound that changes, but also our coordination, overall technical proficiency, imagination and freedom of expression. The benefits of body awareness also help in the prevention of injury, and in healing after a disabling injury.

Uri Vardi has performed as a recitalist, soloist, and chamber player across the United States, Europe, South America, Asia, and his native Israel. Born in Szeged, Hungary, Vardi grew up on kibbutz Kfar Hahoresh, Israel. He studied at the Rubin Academy in Tel Aviv, was an Artist Diploma student at Indiana University, and earned his Master’s degree from Yale University. His teachers have included Janos Starker, Aldo Parisot, Eva Janzer, and Uzi Wiesel. Vardi has recorded and toured widely with the Israel Chamber Orchestra and was a founding member of the Sol-La-Re String Quartet. He has served as Assistant Principal Cellist of the Israel Chamber Orchestra and Principal Cellist of the Israel Sinfonietta. In 1990, following an extensive teaching and performing career in Israel, Vardi was appointed professor of cello at the University of Wisconsin-Madison.

Vardi’s students have been successful as soloists, chamber players, faculty members of major music schools (such as Oberlin College and Peabody) and members of major orchestras such as The New York Metropolitan Opera (Associate principal), the Israel Philharmonic Orchestra (Principal), the Boston Symphony Orchestra, the Simon Bolivar Orchestra in Caracas, Venezuela (Principal), and the Seattle Symphony Orchestra. In his teaching, Vardi puts great emphasis on the relationship between movement and sound. In order to further his understanding of this approach, Vardi has specialized in the Feldenkrais Method®, for which he received the 1999 UW-Madison Arts Institute Creative Arts Award. He completed a Feldenkrais Practitioners Training and was certified by the Feldenkrais Guild of North America® and by the International Feldenkrais Federation as a Feldenkrais practitioner in 2003. In the last decade, Vardi has created a new course at UW-Madison: “Feldenkrais for Musicians”. In 2012, Vardi was awarded the UW Art Institute Emily Mead Baldwin Award to Create a Program for Somatic Education in the Performing Arts at UW-Madison.

Listen to him on Wisconsin Public Radio: https://www.wpr.org/listen/863471

Learn about his work at the University of Wisconsin: https://www.music.wisc.edu/faculty/uri-vardi/

Read two of his articles:
https://www.music.wisc.edu/wp-content/uploads/2014/04/What-the-Right-Hand-Knows-ASTA-Publications-Highlights.pdf

The purpose of our workshops is to help musicians become aware of the intimate relationship between the way that they use their body and the music that they create. http://www.yourbodyisyourstrad.com/

Set in the historic center of Arcidosso, Italy, and situated in the heart of Tuscany, Clazz International Music Festival features a fully integrated musical journey for attendees.  http://www.clazzmusicfestival.com/

Watch these instructional videos of Uri working with musicians.